Apprenticeship is an ancient idea; skills have been taught by others for centuries. In the past, elders worked alongside their children to teach them how to grow food, wash their clothes, build homes and speak the language. Today, the term apprenticeship is more closely associated with learning a skilled trade; the journeyman works with the apprentice and shows him how a task is completed. The journeyman offers words of encouragement or correction and practices with the apprentice until he is able to do it without assistance or supervision. Then, he too becomes proficient and is able to pass on his skills to others. This cycle defines apprenticeship as one learns how to do specific tasks by working and learning from another. The thinking process of apprenticeship is visible to all involved, which makes it an ideal method of learning. This model is supported by Albert Bandura’s theory of modeling. 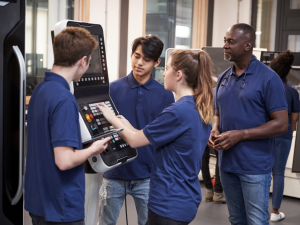 This means that there are a few differences between the cognitive and apprenticeship models. The big ideas for each are summarized in the table below.

As it is typically challenging to implement an apprenticeship in a traditional classroom environment, cognitive apprenticeship attempts to intercede in four main areas.

See also: How Can We Align Learning Objectives, Instructional Strategies, and Assessments? 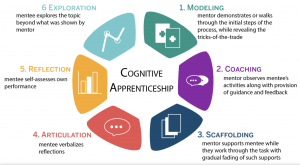 We can achieve the goals of cognitive apprenticeship using specific methods.

There are many advantages to using multiple choice (MC) questions as an evaluation / assessment strategy. They are easy to set up, easy to mark, and allow teachers to cover a wide range…

Learning Management Systems (LMSs) are becoming a vital part of classrooms in the 21th Century. This is a list of open source learning management systems. By open source we mean that source code of…

What are Wikis? And should you use them? A Wiki can be defined as ‘‘a system that allows one or more people to build up a corpus of knowledge in a set of…

Together with Edward Gurst, David Krathwohl, Max Englehart and Walter Hill, psychologist Benjamin Bloom released Taxonomy of Educational Objectives in 1956. This framework would prove to be valuable to teachers and instructors everywhere…

The humanistic and constructivist approaches to education, which emphasize that learning occurs naturally, include David Kolb’s Theory of Experiential Learning. Kolb proposed that experience was critical in the development of knowledge construction, as…

While there have been many contributors to the paradigm of anchored instruction, John Bransford is considered the leader of this framework. Through the Cognition & Technology Group at Vanderbilt University, he facilitated the…