Vygotsky created the concept of the zone of proximal development, often abbreviated as ZPD, which came to be a central part of his theory. Language is the way that a child communicates with others after they are born and they continue to learn by interacting with those around them. Building on his idea of social interaction as the basis for learning, he broached the value of a mentor or teacher in the life of a student. 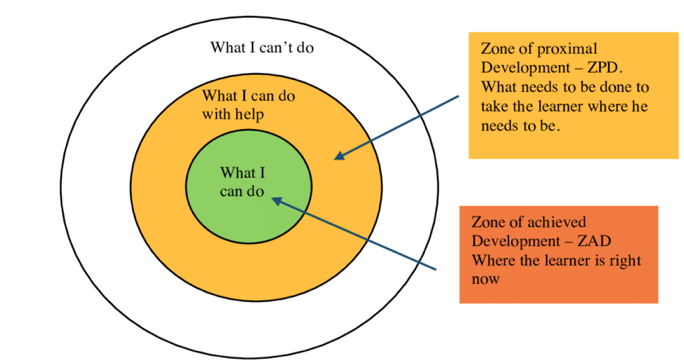 Vygotsky declared some controversial statements that went against prominent educational research at the time. He dismissed the idea that there was no ideal age for learning and instead introduced ideal stages for learning, a similar opinion as Piaget. He also explained that the cognitive growth increased less for students with a higher intelligence than a lower intelligence when they entered school. He coined this term relative achievement, a method that highlights the departure point of student learning and not just the end result. This led Vygotsky into the idea of the ‘zone of proximal development,’ as it assessed the change in cognitive development of students and not just the final outcome. Students benefit directly from the social interactions in class, and ideally, reach their learning potential with the help of their teacher.

As learners grow within their zone of proximal development and become more confident, they practice new tasks with the social support that surrounds them. Vygotsky maintains that learning occurs through purposeful, meaningful interactions with others.

Many psychologists, including Piaget and Bandura, have assessed the cultural influences on learning, however, only Vygotsky claims that they are inherently woven together. He felt that studies should be analyzing the individual within the society and not the individual itself. Only then could you observe the level of growth, as it is social interaction itself that promotes mental development. While morals, values, and thoughts are believed to be influenced by society, the process of learning is not seen as something that is mimicked. Vygotsky outlined that interactions with others created growth by making connections between concepts. To summarize, Vygotsky’s views on cognitive development can be grouped into four main points, outlined as follows:

Curriculum – Learning goals and curriculum outlines should be designed around social interaction between students and tasks.

Instruction – The idea of scaffolding is the basis of instruction. Students can achieve their learning potential with guided instruction from their teacher. The teacher constantly reassesses the levels of achievement of the student and creates the next task as a building block to the goal. As an added benefit, the student also learns problem-solving skills from performing leveled tasks on their own.

Assessment – Evaluations are catered to each student based on their zone of proximal development. As teachers strive to see the potential level of cognitive development in all students, assessments must cover a range of abilities. Some students may achieve a higher level with support from their teacher than others.

On a more practical note, many wonder how this type of learning can be implemented in schools. Scaffolding seems to be a cycle – the teacher is constantly evaluating the progress of a student throughout a learning activity and consistently responding according to their needs. This means that the teacher adjusts the difficulty of the tasks and learning goals in order for the student to meet the expectations. The zone of proximal development indicates the level of task that the student can accomplish independently, which, in turn, demonstrates the actual activity that can be accomplished with guided support from the teacher. As they create learning goals, teachers must keep in mind the fact that each student will have unique personality traits that will affect their zones.

To summarize, students require many opportunities to demonstrate their point of learning in order for the teacher to create the next steps and support each need. The gradual release of responsibility, which we know as scaffolding, allows students to gain independence in learning tasks as they reach their goals. The teacher begins by offering a strong presence and close guidance; this may include demonstrations, facilitating activities, or explicit teaching of ideas. As the student moves through the zone of proximal development towards the goal, the teacher gradually releases control to the student as they approach their level of potential learning. The tasks become progressively more difficult as the student gains more knowledge and comes closer to reaching their potential level of cognitive development. Some suggest that all tasks should be on the higher end towards the optimal level of the zone of proximal development in order to main the interest of the student. Scaffolding is used as a tool to achieve the potential learning outcomes of a student.

The question remains then: is the theoretical idea of zones of proximal development really that different from what experienced teachers do in the classroom? Vygotsky’s theory is centered on the idea that social interaction is critical to cognitive development. With the exception of some large classes, students actively engage with their teacher and with each other. Collaborating with peers is encouraged but cannot be over-used, as it may actually cause stagnant growth in some cases. Additionally, the teacher is the most educated on the learning process, automatically assessing many factors related to the student’s potential growth.

Language tasks in education are still the best indicator in cognitive development. Such activities allow chain reactions to occur that begin with solid communication skills, lead to clarification of inner speech and continues with growth in thought patterns. However, one must not view language activities as exclusive: it does not mean that a student possesses a low level of cognitive ability if they are unable to orally express themselves. Language is complex, and some do not grasp the subtle meanings present in communication. Other types of intelligence, such a musical and bodily-kinesthetic, are not necessarily compatible with learning-centered on language. It is important to note, however, that early development of language offers an advantage to children in our society, as it offers favoritism towards other educational skills.

Currently, the value of educational software has been inconsistent in relation to Vygotsky’s theory. As there is such a broad variance in computer-based programs available, it is challenging to evaluate its effect on learning. Social interaction looks different when on a computer; now students may be interacting with a human-like software program. Some artificial intelligence systems offer great responses to questions and misunderstandings, but others are not as advanced. There is great hope that a sophisticated program could assess a student’s zone of proximal development and respond appropriately, but for now, the wide range of programs available are too unpredictable.

Vygotsky made it his mission to analyze the effects of socialization of cognitive development. We can see how language is the central approach of his theory, and how the cultural and societal relationships affect learning. In real-life applications, we discussed the utilization of the zone of proximal development by the teacher, which also emphasizes the need for student-directed learning in the educational system. As we move towards remote learning and computer-based applications, we need to evaluate the impact of the social world and the attention required for students.

Instructional models can vary widely. While some may focus on how to make the lesson plans and others focus on the delivery of the content itself, the Dick and Carey instructional design model…

The Kirkpatrick Model is probably the best known model for analyzing and evaluating the results of training and educational programs. It takes into account any style of training, both informal or formal, to determine…

Adult education, self-direction, and andragogy Although the theory of Andragogy is a complex one, this article attempts to outline the main points of Malcolm Knowles. As educators are always looking for helpful ideas…

The constructivist theory is based around the idea that learners are active participants in their learning journey; knowledge is constructed based on experiences. As events occur, each person reflects on their experience and…

Albert Bandura’s “Social Learning Theory” and Its Impact on Teachers and Learning Think back to your childhood. Do you remember learning to ride a bike, how to play checkers, and do simple addition…